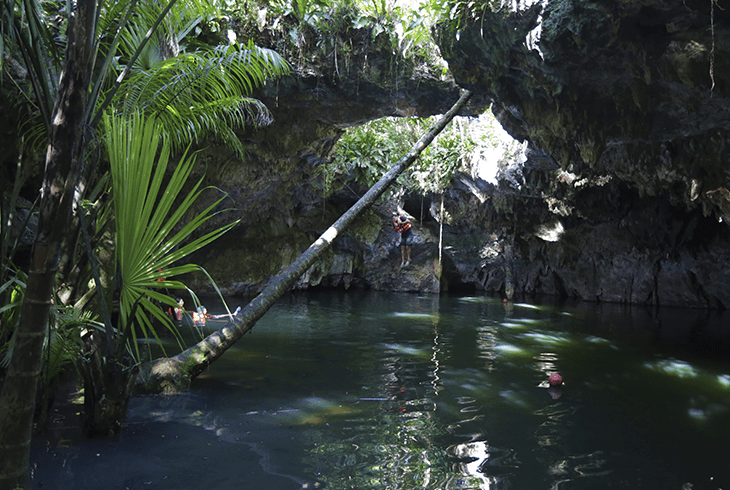 A fantastic place especially if you love the outdoors. If the thrill of driving in the jungle and exploring unique natural areas turns you on, this adventure is for you!

Once you reach the Jade Cavern the staff will explain about this unique Cenote named “Chempita” and then you will walk down the path to the cavern. There is a 20 foot cliff from which you can jump into the water and swim under the formations.

It takes about 30 minutes to get to Jade Cavern by off road vehicles. The staff is extremely accommodating and will make the excursion a very memorable experience. 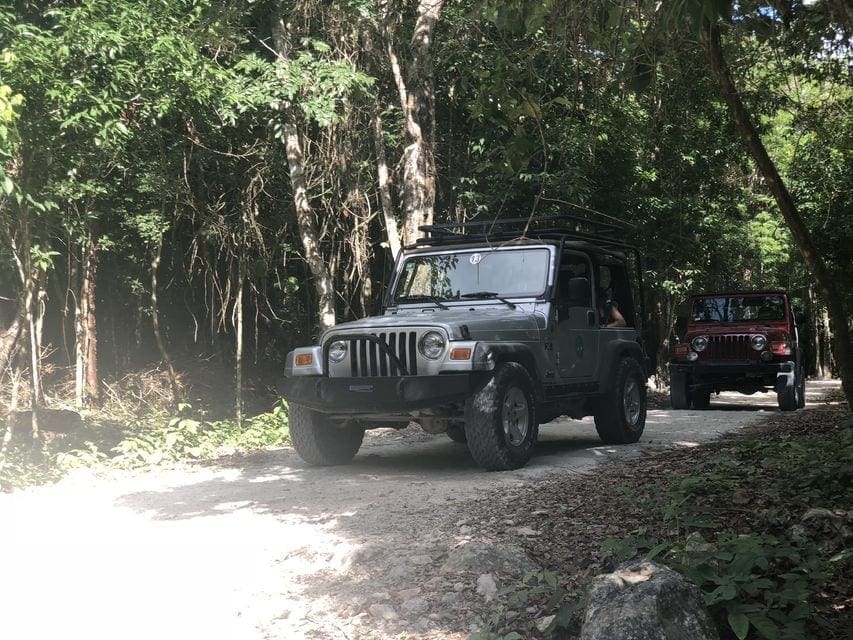 Some history of Maya cave sites:

Caves used by the Maya civilization of pre-Columbian Mesoamerica had religious status associated with them. Certain beliefs connected with cave sites are also maintained among some contemporary Maya communities. Many of these cave sites are understood to have served religious purposes rather than utilitarian ones (although they did serve as a source of fresh drinking water as well). Archaeological artifacts found within caves tell a story of Mayan religion and society.

A desire to be near the sacred influenced Mesoamerican settlement. Caves were important elements in Mayan myths. Mesoamerican belief systems liken water to fertility. It’s no wonder that Cozumel was home to the goddess of fertility (Ixchel), Accordingly, these natural features were considered sacred and were sought out by Mesoamerican migrants looking for a new home.

Artificial landscapes often mimicked sacred landscapes. Sometimes these doorways were Witz monster mouths. In the Yucatán many Late Postclassic temples had Spanish churches built on top of them after the conquest and so caves and cenotes can still be found near these places today. In fact at El Cedral Cozumel, which is near Jade Cavern, there is a church directly next to a Mayan Ruin.

Entrances to the Underworld:

Caves are linked with wind, rain, and clouds. The Mayans of the highlands believe that lightning came from caves. The Yukatek and Lacandon believe that caves and cenotes were where rain deities reside and the Yukatek of the sixteenth century sacrificed humans to appease the gods.

After it rains heavily, water rushes out from some caves signaling the beginning of the rainy season and the advance of the crop cycle. This artificial landscape showed that the king had control over water, rainmaking, and fertility, thereby legitimizing his authority.

There is much more history and significance associated with natural wonders like Jade Caverns and Cenote Chempita. But the best way to experience the natural beauty that can be found in the very heart of Cozumel Mexico is to come and see it for yourself.

Contact us to get to know this wonder of nature and explore its history in one of our private jeeps.